Under a Blackberry Moon 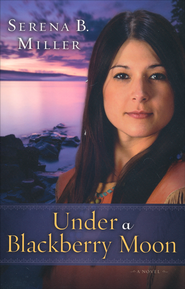 Under a Blackberry Moon by Serena B. Miller

After her trapper husband died, Moon Song, a young Chippewa woman with a newborn, found her way to a lumber camp outside of Bay City, Michigan. She was welcomed there, given a job as a cook, and she made some good friends. Still, after months pass, she realizes the unlawful town isn’t the right place for her. Moon Song decides to make the journey with her eight-month-old son through the wilderness back to her village and grandmother with her eight-month-old son.

Isaac Ross—nicknamed Skypilot because he’s a former preacher—works at the lumber camp. His boss asks that he escort Moon Song via steamboat back to her people near Lake Superior. Skypilot is fond of Moon Song—like a little sister. She loves him, but holds her feelings at bay, believing their worlds are too far apart. Moon Song also struggles with trusting that a white man can love and commit to an Indian girl. In her experience, white men always leave.

A trip that should only take a few days turns into an emotional and physical challenge, and they must depend on each other for survival. As Moon Song strives to return to a life with her people, Skypilot seeks answers for his own life. Each must decide if they love the other enough to sacrifice their own way of living—or if they must go their separate ways.

1. This story has well developed characters. Moon Song is kind, tenderhearted, unselfish,and loving towards her friends and family. But when threatened, she stands her ground and fights to protect herself or loved ones. She’s a competent, independent woman who can survive in the wilderness on her own.

Skypilot is a likeable guy who is strong physically, morally, and spiritually. But when it comes to survival in the wilderness, Moon Song can—and does—teach him many things. His ego isn’t so out of control that he isn’t willing to learn. On the contrary. He’s eager to gain knowledge.

2. The author integrates the Chippewa way of life into the story in a way that feels natural. Readers learn right along with Skypilot. He comes to understand the importance of developing relationship—and respecting the culture and beliefs of others. Moon Song’s cooking methods and survival techniques are fascinating.

3. Spiritual themes come through the story organically and are never “preached.” Moon Song and Skypilot are taken on a spiritual journey as they examine and share their beliefs. They’re faced with the question: how can they hope to have a life together when they believe different things? The story reminds us that God has a master plan that sometimes includes surprising twists and turns—but the end result can be so much better than what we dreamed. 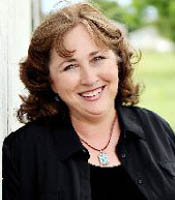 Serena B. Miller is the RITA Award-winning author of The Measure of Katie Calloway and A Promise to Love, as well as numerous articles for periodicals such as Woman’s World, Guideposts, Reader’s Digest, Focus on the Family, Christian Woman, and more. She lives on a farm in southern Ohio.

You may find Under a Blackberry Moon through the direct links for the following online sites: