To Die For: A Novel of Anne Boleyn 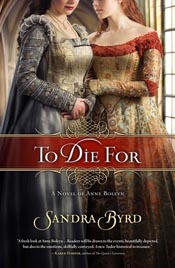 To Die For: A Novel of Anne Boleyn
by Sandra Byrd

To Die For is the story of Anne Boleyn’s life as seen through the eyes of her best friend, Meg Wyatt. It begins with the two young women pledging their loyalty to each other, no matter the consequences. Both have romantic aspirations, and Meg has already fallen for a boy from a nearby estate. Will Ogilvy loves her, too, but feels called to become a priest. Meg, heartbroken, turns her back on God.

With no control over who she marries, Meg is married by proxy to a sick and elderly baron. But when Anne gains popularity in the English court, Meg is asked to join Anne there. As a lady-in-waiting, Meg watches King Henry VIII and Anne fall in love. He finds a way to twist Scripture in order to get rid of the queen and take Anne as his wife. At first, life is exciting and promising, but without producing an heir, Anne’s favor with the king and others in court begins to wane. Deceit resides around every corner, and it’s difficult to know who to trust. At the same time, Meg continues to have her heart wrenched by the presence of the priest she loves, but cannot have.

Anne agrees with the reformation of the church, supports the Bible being translated into English, and encourages change. Through Meg’s friendship with Anne and what she’s seeing, hearing, and experiencing, Meg feels drawn back to God. But the relationship between Anne and the king deteriorates, and with Meg’s own life in jeopardy, she’s faced with difficult choices.

For writers, this 2012 Christy Award finalist is an excellent example of how to write a novel that includes real people and events in history.

The opportunity to see Anne Boleyn’s life through the eyes of another person intrigued me. To Die For is not only Anne’s story, it’s Meg’s. Although what happened in these two women’s lives is fictionalized, the story is richly filled with facts taken from extensive research done by the author.

To Die For is beautifully written. While the language includes words used during that time period, the book never feels bogged down with them. Instead, they enhance the experience of being placed into the Tudor life. And while this story takes place in 1518-1536, readers can still relate to similar struggles and challenges the characters face.

When Will joins the priesthood, Meg initially holds God responsible for taking the man she loves away from her. She also deals with an abusive father and a brother who seems to hate her and who will do anything he can to make her life miserable. She’s forced to marry a man she doesn’t love.  It’s often easy to blame God when things don’t go our way, but Meg takes a spiritual journey and discovers that God has an ultimate plan for her—as he does for us.

Loyalty is a driving force in this story—loyalty to friends, lovers, family, and God. We must make choices almost every day about who or what we’re going to be loyal to—and then be willing to accept the blessings or consequences. Meg feels so strongly about her calling to be a true friend, she’s willing to set aside her personal dreams and risk her life to stay with Anne until the bitter end.

When I read a novel (along with being entertained), I want to be challenged, moved, or changed in some way. Sandra Byrd has delivered with To Die For. I was literally moved to tears by this story and the beautiful friendship portrayed. I will never look at Anne Boleyn the same way again. 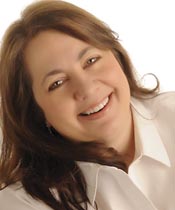 After earning her first rejection at the age of thirteen, bestselling author Sandra Byrd has now published more than forty books. Her adult fiction debut, Let Them Eat Cake, was a Christy Award finalist, as was her first historical novel, To Die For: A Novel of Anne Boleyn. To Die For was also named by Library Journal as a Best Books Pick for 2011 and The Secret Keeper: A Novel of Kateryn Parr, was named a Library Journal Best Books Pick for 2012. Sandra resides in Washington State with her husband Michael, a chaplain, their two children, and a circus dog named Brie.

You may find To Die For through the direct links for the following online sites: